Bromocriptine is a drug, a stimulant of central and peripheral dopamine receptors D2 (a semisynthetic derivative of ergot alkaloid).

The drug actively affects the circulation of dopamine and norepinephrine in the central nervous system (CNS), reduces the release of serotonin.

Synthesis of prolactin bromocriptine does not violate. The inhibitory effect on hormone secretion is removed by dopamine receptor blockers (eg, chlorpromazine).

Bromocriptine (like apomorphine, also a stimulant of D2 receptors) exerts an emetic effect, reduces body temperature, reduces akinesia caused by reserpine, tetrabenazine, antipsychotic drugs. The drug has an antihypertensive effect, associated with the effect on the central nervous system, affects the sympathetic nerve endings and smooth muscles of the vessels. Reduces the blood levels of catecholamines.

Unlike ergometrine, methylergometrine and other similar ergot preparations, it does not have a "mother" (oxytocic) action. On the contrary, it inhibits uterine contractions caused by metergergometrin.

What is the dosage for bromocriptine-oral?

Bromocriptine should be taken with meals.

Indicated for treatment of dysfunctions associated with hyperprolactinemia including amenorrhea with or without galactorrhea, infertility or hypogonadism; also indicated in patients with prolactin-secreting adenomas

Quick release formulation (Cycloset) is the only bromocriptine product indicated for diabetes mellitus type 2 as adjunct to diet and exercise to improve glycemic control; there is currently no therapeutically equivalent generic version of Cycloset available in the United States

Note: Cycloset is not indicated for hyperprolactinemia, Parkinson disease, or acromegaly 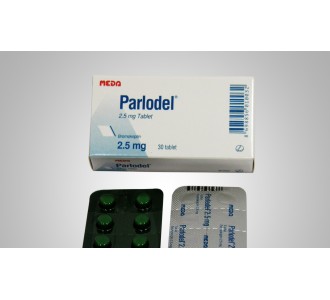